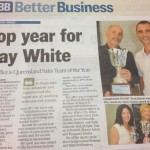 The corks were popping in the office of Ray White City in Mackay last week after the sales team brought home the Ray White Queensland Sales Team of the Year Award for 2012.

Ray White City principal Chris Laval said the award was based on a range of criteria, which all related to how his team conducted business.

“This is the most rewarding recognition to have appointed to my team, given the very unpredictable markets of 2011 to 2012 which were highly influenced by the resource tax and GFC,” Mr Laval said.

“It Illustrates how adaptive and experienced the team are at working with market trends.”

He said the award took into consideration turnover, volume of sales across all agents, and the overall ranking in Queensland.

The office was named number one in North Queensland, and 11th in the State.

The office was recognised at the Plaza Ballroom in Brisbane on the March 27 amongst 900 of their peers.

Six of the agents were also recognised as Premier and Elite Performers.