3 years ago•By Tammy Laval
Hundreds of new jobs and numerous business opportunities will be created in Queensland with the Liberal National Government’s announcement of Rheinmetall as the selected supplier for the Combat Reconnaissance Vehicle project worth over $5 billion in acquisition. More than $1.8 billion will be spent in Queensland on the project creating 330 new jobs for the state. Though the key facility is located near Brisbane, the supply chain for components for these Boxer super tanks stretches all along the coast and there are North Queensland businesses who are poised to seize opportunities.
Part of that great announcement was made today that will create new jobs in Mackay.  Local business, DGH Engineering announced as being involved in the construction of the new Reconnaissance Combat Vehicle as part of the Australian Defence Force’s Land 400 program.
Australia’s new Combat Reconnaissance Vehicle will be built in Queensland with jobs created across the whole country.
Here are three things aspect relevant to the security of this contract you should know:

It will create up to 1450 jobs right across Australia

The vehicles will be made by Australian workers using Australian steel 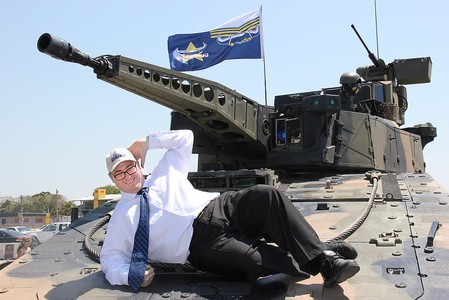 Federal Member for Dawson – George Christensen, demonstrating his support for the win this brings to our electoral, and details supported from the members facebook page
http://raywhitemackaycity.com.au/news/mackay-businesses-in-box-seat-with-defence-contract-win/
https://george.report/north-queensland-to-benefit-from-super-tank-build/
Share:
Up to Date