The CoreLogic April 2019 Home Value Index results out today confirmed that the decline in home values where loosing movement over recent months in Sydney and Melbourne.

And, Australia’s housing downturn moving across a wider reach, based on the CoreLogic April 2019 Home Value Index results shown below.

The results show that values continued their downward trajectory throughout April, falling by 0.5% over the month to be down -7.2% over the past twelve months and -7.9% lower since peaking in September 2017.

It represents the largest annual fall in twelve months ending February 2009, which was associated with the Global Financial Crisis.

Although housing values are broadly trending lower, the rate of decline has been easing since moving through a monthly low point in December last year when national dwelling values fell -1.1%.

In March, values dropped by 0.6% in what was the smallest of the month-on-month decline since values fell by 0.5% in October last year. 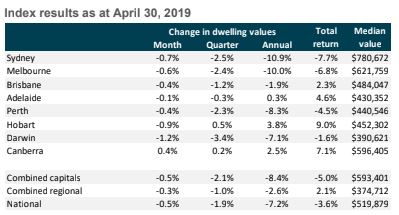 CoreLogic Head of Research Tim Lawless said the improvement in the rate of decline could be put down an easing in the market downturn across Sydney and Melbourne, where values were previously falling much faster.

“In December last year, Sydney dwelling values were down -1.8%, with the pace of month-on-month, falls progressively moderating back to -0.7% in April,” he said.

“Similarly, Melbourne values were down -1.5% in December, with the rate of decline improving to -0.6% in April.”

According to the data for April, dwelling values fell across every capital city apart from Canberra, while regional areas of Tasmania, Victoria and South Australia also avoided a fall.

Mr Lawlesss said the broad-based nature of lower housing values highlighted that while the rate of decline has eased, the geographic scope of lower dwelling values remains broad.

“Values were down by -0.9% in Hobart, signalling a weakening across what has been one of the strongest capital city markets for value gains and leaving Canberra as the only capital city where dwelling values were up over the month,” he said.

Across the 46 capital city SA4 sub-regions, only six areas experienced change in dwelling values, with the best conditions now found across Hobart and Canberra, as well as regions of Adelaide and Brisbane.

According to the figures, the weakest capital city sub-regions were generally confined to areas of Sydney and Melbourne, with Perth’s Mandurah also reappearing in the list of the weakest performing capital city areas.

Melbourne’s prestigious Inner East leads the nation in recording the largest value falls, down 15.4% over the past twelve months.