Mackay City Centre celebrations to light up at opening.

The opening celebrations marking completion of the revitalisation project, were held in the new precinct between Victoria and Wood streets with the official proceedings taking place on the 27th of November at 6:30pm.

The City Centre Revitalisation Project was funded by the Australian Government and council on a 50-50 basis, and a means to celebrate the reopening of the City Centre for both local businesses and residents of Mackay, to push the dust and difficult traffic conditions aside and admire the shiny sparkly revamp.

For those who didn’t attended the “Twilight City – Beyond Your Imagination Street Party” held in the city centre … you missed out on the Event of the City ! For which the public and media were still talking about this party weeks and months later, after the event. 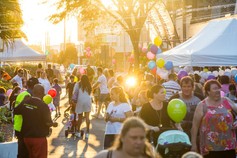 Especially given the Council had provided Public transport to and from the event, to get people to public car parks and further afield. The routes included East Mackay, West Mackay/Glenella, South Mackay, Slade Point/ Marina, Andergrove, Beaconsfield, Northern Beaches, Marian/Walkerston and Sarina.

Residents were able to hitch a free bus ride to and from the Twilight City – Beyond Your Imagination Street Party in the City Centre, with families being able to be dropped off right to the doorstep of the event.

The City Centre taskforce entered into a partnership with Mackay Transit Coaches with the support of council, to offer the free services, including pick-up points from nine key locations across the region. 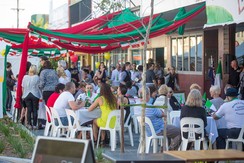 Not only could you feel the sense of a great night of entertainment was about to unfold for the evening, community spirit was intoxicating!

City centre businesses opened their doors and/or were out on the street connecting with residents who had perhaps never venture to their business normally, especially during the revamping period.

The imagination used by our fellow businesses to connect with residents was just superb. It was a fine display of the ingenuity of small businesses, including our very own themed “Minion’s Selfie-Photo-Booth”, which was a big hit with families and tweens. 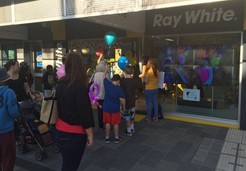 We couldn’t open our doors fast enough for the early arrivals, who had spotted our special Window Installation, and were waiting for the 4pm start with a line-up developing outside our door.

For this years event, we inserted a hard to miss Minion Window Installation, with a matching backdrop and surrounding props.  This allowed patrons at the event to take pictures of their family either by themselves. or with our staff offering to take the photos.  We ran an additional two booth areas, with cut out Minion props surrounded with flashing lights (well known from the Bee Do Bee Do Bee Do! scene); and a Minion hand held ‘One-in-a-Minion’ picture frame.  Of course the whole ‘Minion’ theme went with our Corporate colours of black and zesty yellow.

Give away lolly bags covered our counter top, with ‘Minion’ themed Tic-Tacs, Banana & Pineapple lollies to help carry the theme through. On our front screen, we ran the ‘Minion’ movie which coincided with the movie’s release a couple of months earlier, and allowed for younger children to sit and watch the movie while one of the parents foraged for food.

The timing of the “Minion’ movie, also meant there were numerous promotional materials for us to collect and create prizes bags for our Social Media competition, as well as theme our photo booths with photo props. Our Social Media competition, meant that patrons could then post their photos to our Facebook Page, or #RWMackCity to enter into the competition, and as a means for us to collect the photos from the fans of our themed event.

After contemplating our last year event, we took into consideration the highlights and how we could run the event more efficient operationally.  In the same instance, come up with a concept which allowed for easy participation, and quick turn around time in order to allow for the longer operating hour due to the Official Street reopening component.

Our Photo-Booth concept, was a perfect scenario, and allowed our staff to be time efficient in both taking the photos and mingling with the crowds. 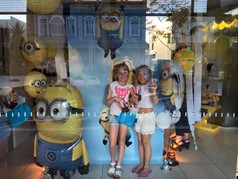 Eventually we had to take reprieve due to sheer exhaustion, and to allow us some time to taste the delights on offer, as well as, see – feel and experience the electric atmosphere from the event itself.  As numbers began to dwindled and families took tired children home, we ended up running our stall from 4-8 pm, even though the street event didn’t finish until 9pm, with the bars, restaurants and night clubs taking the Street Party into another phase of evening entertainment.

The array of food on offer was fabulous. Food outlets realised the crowd that came last year justified the financial risk for them to cater for this year. They could not have been disappointed as the crowd was far greater in numbers than last year.

Entertainment helped to entertain the children, and add that extra amount of zing to the night with roving entertainers, street performers and fireworks through to the project’s official opening.  The main stage provided the main entertainment for the evening with a variety of musical acts and bands.

We have so many talented performers right here in our community, whom also provided an assortment of performances. And thanks to sponsorship of the event we also had some headline acts to embellish the experience.

Escape Travel donated a major prize draw of $24,000 value European River Cruise and City Centre Taskforce donated a $1000 voucher which was drawn on the night. This all lead to many people supporting city centre businesses in order to go into the draw. 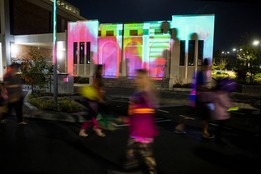 Artslink Queensland grant funding allowed Council to include three community arts projects into the event, with the following on show …

Tided to the whole Street Party event was the launch and cross promotion of the Animating Spaces Mackay UP!  program. Which was also launched on the same weekend as the Street Party, but created as a lead-up event within the Community to cross promote Art within Schools and Community Associations throughout the Mackay Region.

One of the events that coincided with the Street Party was the Twlight Lantern parade along the river walkway that helped kicked off the lead-up to the Street Party opening Ceremony.  It had school groups and community associations create specialty Lanterns to illuminate and display during and after the parade. 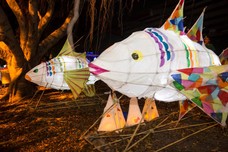 Two other major art projects that the community favoured strongly was the paper Rainbow Lorikeets, which Mackay City Centre is reknowned for during dusk period in the City Heart. As well as the Building Projected Art Display that lit-up the old heritage building in Wood Street with the history of Mackay from a developmental aspect.

In terms of Art Works, the community painted 300 metres of mural; made more than 300 lanterns; wrote more than 100 love letters to Mackay and constructed more than 2000 paper rainbow lorikeets (well known icons to the City Centre).

The unveiling was also part of the opening ceremony for the public art centrepiece aptly named “Cane Fire”, on the Victoria and Wood streets roundabout. 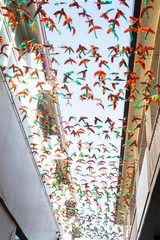 Cr Comerford said Cane Fire’s night visual realm was its outstanding feature, highlighted by Artist Glen Manning, of Niche Arts, conducting an artists talk for the public to engage in.  Along with other artist talks being held at community art project, Meeting Place in Wood Street Park, for “Urban Blooms” and “Deco Blooms”, and Rise digital projection which incorporated digital displays being superimposed onto City Centre buildings.

“Visitors to the City Centre can use wireless and smart phone technology to interact with the sculpture to create their own work of art with light and mist,’’ she said.

The revitalisation’s contractor Vassallo Constructions sponsored a fireworks display to help round off the end of the event for the evening, so the celebrations would literally light-up the City Centre, and allow patrons to head back home, or continue to enjoy the festivities being carried through the night venues and surrounding restaurant & bar businesses.

Last year we had about 10,000 people into the City Centre for the street party, this year they were expecting similar number of around 10,000 – 15,000, so Council wanted to make the event as accessible as possible.  The end results in terms of numbers were that it rose to about three times the numbers of the previous year, with an estimated 30,000 visitors attending the event.