During the lead-up to one of our biggest community events, Mackay’s Twilight City – Beyond Your Imagination Street Party, many would not have been aware of the many Art Projects taking place in the background, in and around the City Centre.

Mackay’s community of Artists were busy, not only creating a background of beautiful and picturesque scenes for the backdrop for this event.  They were also adding to the number of community supported sub-events running off from the main Street Party.

The main aim of the Animating Spaces Mackay Up! program, was to give a makeover to the Mackay wharf precinct, river walk and heritage building in Mackay’s City Centre.  The Up! program held on the 28th & 29th of August, coincided with the opening of the Beyond Your Imagination Street Party event held on the 29th of August.

There were three projects in total combined to create community engagement and participation, & reconnect the community with the Mackay Regional Council’s program #MackayPride, to build upon our sense of identity within our community.

The twilight lantern parade held along the river walkway was the opening event to the Animating Spaces Mackay UP!  It incorporated over 300 lanterns made by the many local primary schools within the region, with the assistance from the artist within the Up! program. 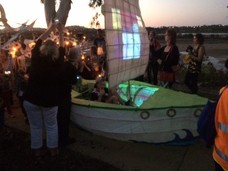 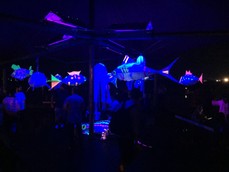 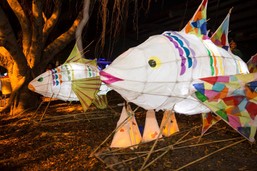 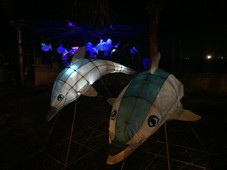 With the project celebrating the beauty of the Pioneer River, the parade of ocean-themed Lanterns, were without question an attention grabber as dusk fell upon the city.  The parade opened at the Blue Water Lagoon, and followed the guided river trail lit by lanterns to the side board-walk of the Forgan Bridge.  On arrival, the public were hushed by the sounds of the enchanted sea shanties and the spectacle of the lanterns meandering along the board-walk.

The UPon the Levee Wall mural was then unveiled shortly after, to help open the ‘UPmarket’ night markets held at the Paxton Creative Space.  With the mural designed to promote Mackay’s multicultural history and progression from past to present.  Driven by Margaret Burgess as Project Coordinator, and supported by a host of local artists to paint the 300 meter wall mural.

The public were then directed to visit the Look Up – Lorikeet Scape installation, in Lorikeet Lane (7th Lane) located in Wood Street.  Those who visited during the late afternoon took in the wonderful bonus of shadow patterns cast by the installation.  The art installation highlighted Mackay’s most iconic residents the Rainbow Lorikeet, reflective of the sights and sounds experienced, and who keep the City Centre abuzz during the dusk period in the City Heart. 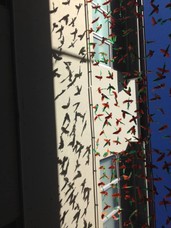 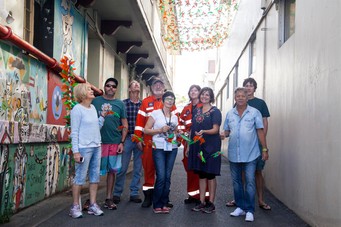 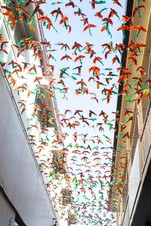 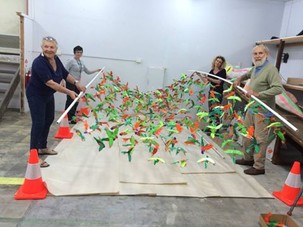 In conjunction with this installation, were a number of performances, and large-scale digital projections.  Contemporary dance by the For Real troupe, and local residents at the historic Post Office building located in River Street.  A visual projections by Donna Robinson, illustrated Mackay’s advancement from early architecture to today’s high-rise skyline cityscape. Showcasing Mackay’s refurbished Pioneer Shire building, and Mackay’s history in overcoming diversity with development & change. 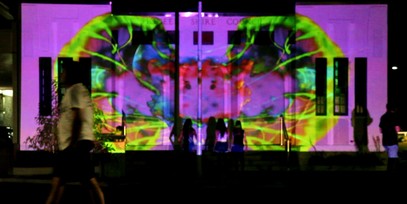 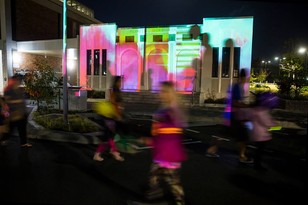 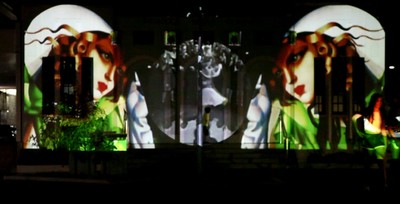 Like many, it would have to be expressed that Look Up project exceeded expectations, and highlighted the gifted art makers of Mackay … ‘it was local artistry at its finest’, as cited by Project Coordinator Leonie Wood.  The Artslink Queensland, Animating Spaces has not only opened the door but enriched Mackay’s cultural and community connection = #MackayPride.